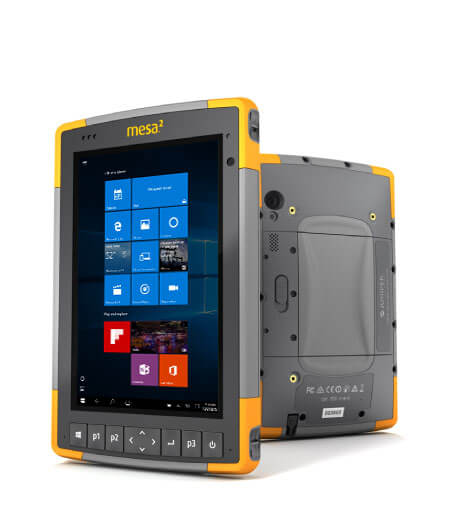 Juniper Systems announced the Mesa 2, a rugged IP68-rated dustproof and waterproof 7″ tablet running Windows 10. The Mesa 2 is Juniper Systems’ first Windows device and is the first Windows 10 tablet with an IP68 rating. The Mesa 2 is also MIL-STD-810G-compliant for resistance to extreme temperature (operating: -4 F to 122 F, storage: -22 F to 158 F) and shockproof to 4-foot drops. It is also chemical-resistant. The Mesa 2 is designed as a data collecting device for the field that is powerful enough to be used as a desktop computer in the office.

The Mesa 2 is powered by a Quad-core Intel Atom Z3745 CPU with 4GB of RAM. Storage options are 64GB or 128GB with a MicroSDXC card slot. The WXGA (1280 x 800) screen has a high-visibility backlight for viewing in sunlight and is powered by Intel HD Graphics. The capacitive touchscreen can be used with gloves, small tip stylus, and in wet conditions. The screen has a Dragontrail High Ion-Exchange (HIE) coverglass for increased impact and scratch resistance.

Along with its rugged features, a unique feature of this tablet is the control keypad on the body including a four-way directional pad, Windows/home key, power key, enter key, and three user-programmable function keys.

The 39 Whr li-Ion battery is removable. Battery life is 8-10 hours, and there is an optional integrated 19-Whr battery for an additional 4-5 hours.