For those who spend a lot of time outdoors, it’s a good idea to have a rugged and waterproof power bank. In addition to providing wired charging for your devices, rugged battery chargers sometimes have other useful features like wireless charging, solar charging, and flashlights. A rugged power bank can also be kept at home for emergencies, and it is the perfect accessory for a rugged phone.

Note: When traveling by plane, portable chargers need to be transported in carry-on bags only, and lithium ion rechargeable batteries are limited to 100 watt hours, according to the FAA. This means that you should not take any chargers larger than 20,000mAh on an airplane, but a 20,000mAh power bank is acceptable. 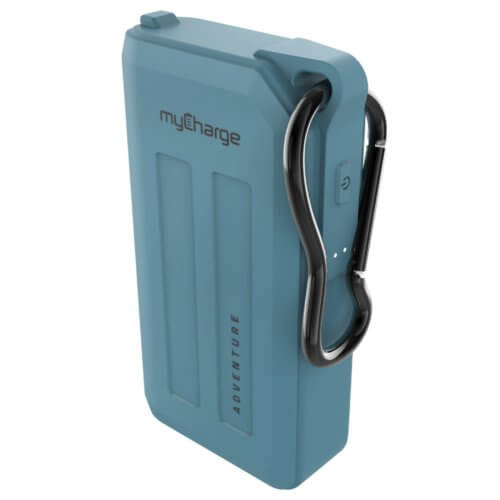 The myCharge Adventure H2O 6700mAh Charger is a smaller rugged external battery that is ideal for day trips and overnight camping trips. It has the capacity to charge the average smartphone with 2.4A power up to 2-3 times, and its small size won’t be a burden when hiking or traveling. It is IP67 water-resistant and submersible with two sealed USB-A ports, drop-proof, and dirt-proof. The charger comes with a large carabiner clip for easy carrying and use outside of your pockets. The Adventure H2O Charger is also available in different sizes and non-waterproof (splash-resistant) versions. The battery can hold its charge for up to a year, so it is also a good charger to keep stashed for emergencies. 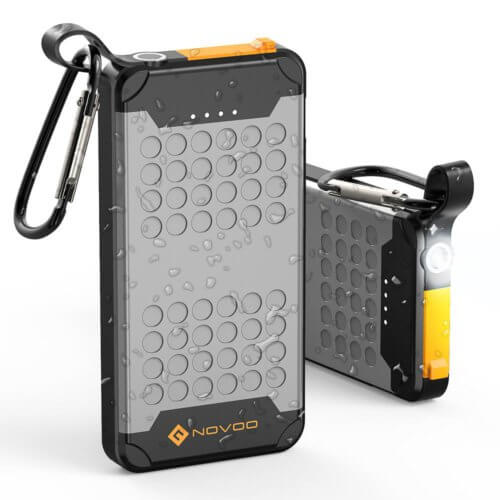 The Novoo 10000mAh Portable Charger has a larger capacity for several charges or multiple devices, but its compact size is still easily pocketable. It has an IP67 water resistance rating, so it can be submersed in shallow water up to one meter deep for up to 30 minutes, and it is also resistant to shock and dust. This power bank has USB-A and USB-C ports for dual charging, as well as an LED flashlight that lasts 45 hours. The USB-C port provides iPhone fast charging with PD 18W, and it is also used as the input to charge the power bank. An attached carabiner in included for convenient outdoor use. The Novoo is recommended if water resistance is a priority. 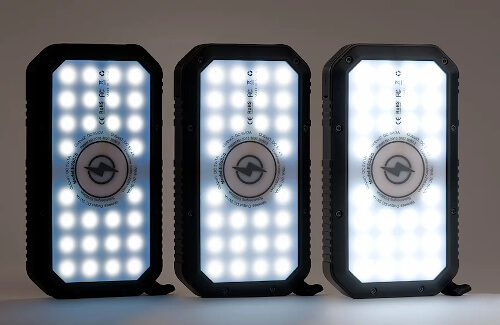 The SOZO 20000mAh Solar Power Bank is recommended for those who want wireless charging and a charger that doubles as a large flashlight or lantern. The multi-LED flashlight has three settings and can last up to 72 hours. In tests, the light was rated at 786 lumens, which is much higher than the average power bank light. The rugged power bank is shock-resistant and has an IP65 rating, so it is dust-proof and water-resistant against rain, splashes, and water jets. One side of the charger houses a solar panel that can provide a bit of power in an emergency. Up to four devices can be charged at once with three USB-A ports and the wireless charging pad, and the input is a Micro USB port. 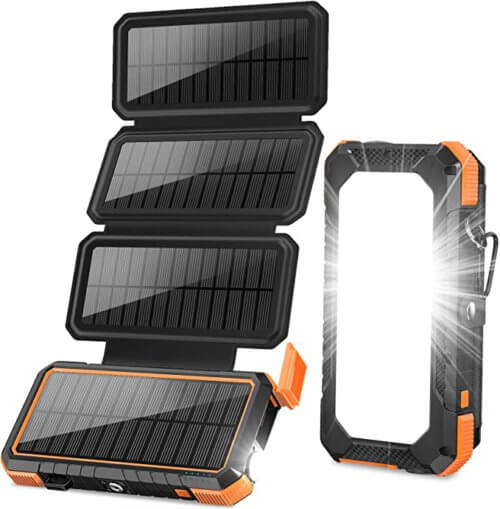 The Blavor Solar Charger is highly recommended as a large and versatile power bank that is not too big for airplane travel. With four solar panels providing up to 1.2A current, it’s conceivable that you can depend on the sun alone for your charging needs, if you are using your devices sparingly. The charger has two USB-A outputs and a USB-C output that doubles as an input, as well as a Micro USB input. It is rated IPX5 for water-resistance, so it can handle rain and splashes, but it should not be submerged. The charger also has a flashlight with emergency modes, a large 3W 32-LED camping lantern, and a built-in compass. 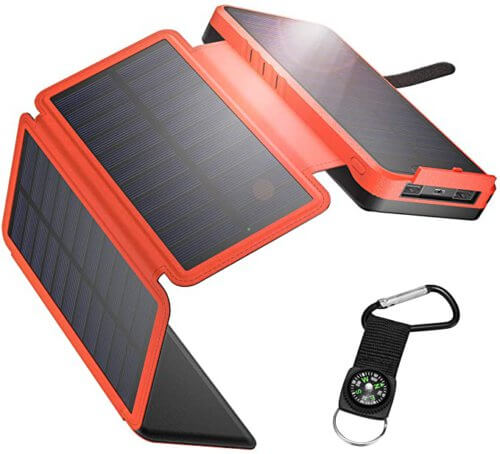 The IEsafy Solar Charger has four foldable solar panels, a Micro USB input, and two USB-A 5V/2.1A outputs. This power bank has an IP65 water resistance rating. The power bank includes a compass carabiner, so it can be hung on a bag or object with the solar panels unfolded for charging. There is also a built-in LED flashlight that has strobe and SOS modes. 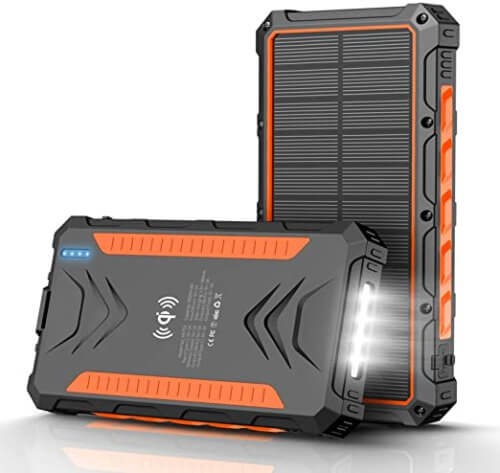 The high-capacity QiSa Solar Power Bank 30000mAh is recommended for individuals with many devices, groups and families, or long trips. This charger has an IP66 rating, so it dustproof and can handle rain, splashes, and water jets, but it should not be submersed in water. The QiSa is capable of charging up to four devices at once with two USB-A ports, one USB-C port, and Qi wireless charging. The power bank is chargeable with the USB-C port and the Micro USB port simultaneously for a faster charging time (6 hours using two 5V/2A chargers). Like other large power banks with a single solar panel, the solar charging feature is mainly there for emergency use and is not intended to be the sole source of charging, as it would take weeks to fully charge the battery. The built-in 200-lumen LED flashlight has an SOS mode for emergencies. The QiSa power bank also includes a carabiner, lanyard, and Micro USB charging cable. Despite its large capacity, the charger weighs only 1.15 pounds. 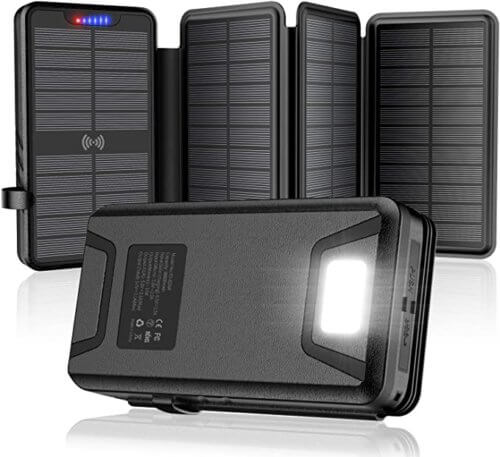 The QiSa 35800mAh Power Bank has four large solar panels, Qi wireless charging, 2 USB-A outputs, and a Micro USB input. This charger is water-resistant against rain and splashes, dust-proof, and drop-resistant. Up to three devices can be charged at the same time, and the built-in flashlight has four modes including strobe and SOS. The solar panels can provide 5V/1.5A of power for recharging. This high-capacity power bank is recommended for groups and longer trips.