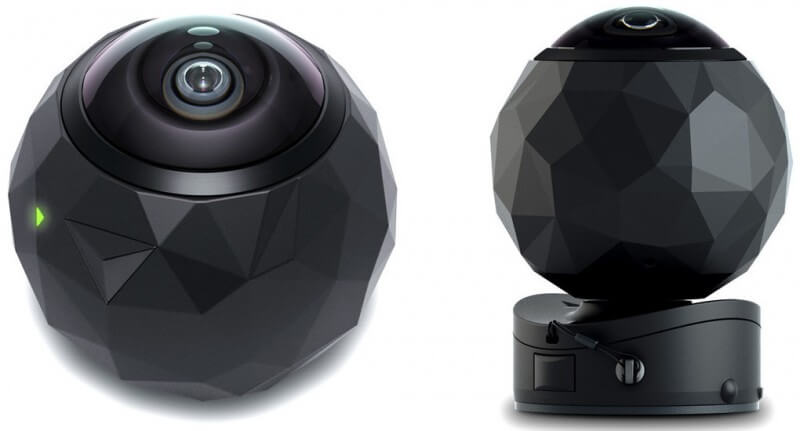 Ruggedness: The 360fly mountable VR camera is water-resistant to 5 ATM, has an IP6X dust-resistant rating (without mic plug), is shock-resistant up to a 1.5 meter drop, and has an operating temperature of -4° to 104° F.

Main Specs: The 360fly is a 61mm spherical shape and uses a single ultra-fisheye lens with F2.5 aperture. The lens has a 240° field of view to record interactive VR “surround videos” in 1504 x 1504 HD resolution at 27.97fps. The recording rate is VBR up to 20 Mbps. The built-in microphone can record mono audio at 48 kHz.

The included tilt mount comes with curved and flat base plates for mounting on a variety of surfaces such as helmets, surfboards, and vehicles.

A bluetooth-connected smartphone can be used as a viewfinder, remote control, and editor with the smartphone app, and videos can be uploaded and shared instantly. Supported smartphone operating systems include iOS 8+ and Android 4.3+.

The 360fly is available exclusively at Best Buy with a retail list price of $399.99.